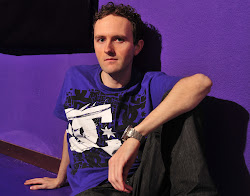 Interview with an innovative entrepreneur
Beat Hochheuser
Founder of Tinte.ch

Inroduction
The following pages tell the story of Beat Hochheuser and his online store Tinte.ch. Tinte.ch is a Swiss online store for printer equipment.

Entrepreneuer Profile
Beat Hochheuser is 31 years old and works as a lawyer in Schaffhausen, Switzerland. At an early age, he developed an interest in computers and spent a lot of time dedicated to learning more about them. While in high school, he first started to build his own computers and worked part time in a local computer shop. With a couple of coworkers from this job, he later founded the online shop PCP.CH which became one of the most well-known online stores for IT equipment in Switzerland. Recently, the store also expanded to Germany and Austria. Beat is a very open person and has a well-developed social network within the IT industry, as well as in the environment of his daytime job. When he is not pursuing one of his professions, he likes to play tennis and spend time with his friends or his family

The Competencies
Beat Hochheuser likes to think of his best skill as having a good sense about products which aren’t established in the market yet, but have a lot of potential to become established. He told me that before he started his online store for ink, almost every person in Switzerland bought original cartridges and toners. Barely anyone did their shopping online when PCP.CH was founded. Since then, a lot has changed in favour of Beat and his former associates. Additionally, he also benefits a lot from his education in law. For example, this comes in handy when working out contracts with manufacturers and suppliers, or writing down the terms and conditions.

The Opportunity
Beat came up with the idea for the ink shop during his time as a student. Like every other student, he had to print a lot of lecture notes, assignments and case studies. He noticed that he spent a lot of money to purchase original cartridges and toners. In Europe, printers are sold very cheap and the producers of the printers make profit with their sales of overpriced cartridges and toners. Since he was unhappy about the big amount of money he had to invest in his printouts, he decided to look for a cheaper option for himself as well as his fellow students. Overseas he discovered a variety of different compatible products from no-name brands that were in a much lower price range. He tried out most of the products, and analyzed their quality. After sorting out the bad ones, he decided to start an online store which he named Tinte.ch (Tinte is the German word for ink) to offer this affordable substitute to all Swiss printer users.

The Store
The online store for printer supplies offers original cartridges and toner of the printer producers and their substitutes. An even more budget-friendly option contains the refill ink set which contains an ink bottle, a needle and a manual which explains where to inject the black fluid. Most other stores only offer the original printer equipment which is double of the price when compared to their no-name substitutes. As an additional competitive advantage, Beat pointed out that because he only operates from an online store, he has very small rent expenses and therefore is able to offer the original products at fair prices.

How to Become Market Leader
In the early days, not everything looked bright. On one hand, Tinte.ch was the first online store which offered a wide range of cartridges and toners. On the other hand, shopping online was not popular among people in the Swiss market because few knew that this more affordable substitute existed. To make the alternative products known to his target market, he took advantage of the small budget he had on hand and decided to hand out flyers in schools and universities. Beat also arranged publicity through his highly developed networks from school and work to give interviews in local newspapers. Over time people became more used to surfing the internet and search engines gained center stage. As a computer enthusiast, Beat figured out which data the search engines were collecting, and used their results to call attention to his website. He exchanged targeted hyperlinks with other websites and implemented knowledgebases into his homepage. As a result, people who typed in search keywords like ink cartridge, print cartridge, ink or toner, saw Beats website in the top results. Because of this advantage, people found their way to Beats online store. People who were only looking to buy an original cartridge also found their way onto his website, not yet knowing there were any substitutes. Once printer users were in the online store they figured out very quickly that the no-name brands are considerably cheaper and so many new customers tried the new products.

The Metrics
Through customer feedbacks Beat found out that many people are skeptical towards the quality of no-name products. Because of this fact, he decided to send his products to different independent measuring institutes, and received several certificates for the ink quality. To keep track of his customers Beat also analyzes his sales figures regularly. He mentioned that he discovered a change in customer preferences from the refill ink sets to the third party cartridges. Beat sees the reason for this change because of the fallen price of the cartridges and their convenient usage. As a response to this demand, Tinte.ch is now offering a broader variety of cartridges.

The Retrospect
Asked about lost opportunities Beat told me that he probably could have started earlier with this business and grew the company faster. But he was very young when he founded the company, and his studies were his main priority back then. Furthermore, he assumes that he could have expanded earlier in to other countries. Tinte.ch expanded into the Austrian market in the beginning of 2012.

Conclusion
In summary, I would like to point out that even though there are a lot of theories which help you to start and maintain your business, it is also essential to be in the right spot at the right time. If you manage to pull the right strings with your own skills, with a well-developed network and a clever idea, you can accomplish goals even with a small amount of money.